How Publishers Can Harness the Power of the Creator Economy

Changes in the media environment can happen quickly, and nowhere is this fact more apparent than in the world of social media. The rapid rise of influencers and the new creator economy has prompted deep soul searching amongst those in the world of publishing.

Friend or foe? Opportunity or threat? As content from online creators eats into traditional audiences, publishers should attempt to understand these creators and their methods, and the reasons for their success.

How shifting consumer demands give rise to the creator economy

We’re all fans and followers of something be it a hobby, interest, or lifestyle, and we love to seek inspiration from others like us. The power of content creators lies in their authenticity, and their accessibility to everyday people in a way advertisers could only achieve in their wildest dreams.

The rise of TikTok’s ‘skinfluencers’ is one such example. Hyram Yarbro the personality behind @SkincarebyHyram is credited as the catalyst behind drugstore brand CeraVe rocketing to sell-out status. It’s no accident that Yarbro is dubbed the ‘Gen Z whisperer’, a segment that is, along with Millennials, notoriously tricky to capture.

In the heyday of media when publishers’ content guided readers on where to eat, what to wear, where to vacation and so on, it was more or less a one-directional exercise with little to no feedback from the readers. Unlike creators, many publishers are less acclimatised to modern audiences with their exacting, even harsh, standards. As a $100 billion and growing industry that involves over 50 million creators worldwide, the millions of professional creators or influencers are masters of audience engagement with sophisticated and strategic mechanisms for building legions of loyal followers.

What are their secrets, and could publishers harness the same tactics to build audiences too?

How publishers can utilise the creator economy to reach new audiences

Publishers must develop strategies for attracting and engaging new readers and the influencer playbook is key. There is already a strong overlap between the type of content produced by magazines and creators: both have visual impact, are targeted at a defined audience, and occupy niche interests. Where they differ is their ability to engage audiences.

Here are three ways we discussed in which publishers can mobilise creators:

Publishing brands may be dwindling in many ways, but one thing publishers have is status and legitimacy. From established newspaper mastheads to chic magazine titles like People, brand power is star power, and this gives publishers a secret weapon in the media game. In a win-win scenario, publishers gain access to fresh new audiences, and creators get a shiny and prestigious new platform to expand their profile.

The 55-year-old Rolling Stone currently uses this arrangement to great effect. In 2021 the magazine enjoyed its most profitable year in two decades with much of its success tied to a renewed investment in live events and a new editorial focus on creators. Magazine covers like this year’s in-depth profile of YouTube star MrBeast in Rolling Stone’s first-ever creators’ issue are just the start of the title’s heavy investment in creators which includes coverage of creators and involves them as contributors.

One caveat when working with creators is to ensure a water-tight brand fit and thoroughly verify all potential candidates. Publishers should aim to work with established players with clear goals and rules of engagement to minimise the risk of damaging controversy. Keep a close eye on these relationships too, as influencers can fall just as quickly as they rise (see YouTubers David Dobrik, Jeffree Star and PewDiePie et al.)

Existing in both print and digital formats in order to reach new audiences, multiple social channels have become increasingly necessary for publishers.

The best creators have conquered multiple platforms and often have a separate web presence too. The art of the omnichannel is necessary to minimise ‘platform risk’ which leaves brands vulnerable to any one platform’s removal of features or changes in the algorithm that could hurt them. Lastly, a cross-platform strategy ensures publishers against platforms’ sudden decline.

Most publishers likely already have a social media presence but beyond the expected profiles on Facebook, Instagram, Twitter and LinkedIn, there is also TikTok, Patreon, Substack and more to consider. There are always new opportunities, new techniques, and fresh insights to gather on what audiences are thinking and feeling.

One seemingly unexpected development that is so typical of the digital media space is the evolution of Substack from a tech tool to a newsletter platform where long-form authors/creators build vibrant communities.  Examples include journalist Anne Helen Petersen’s Culture Study newsletter with its loyal following numbering in the tens of thousands and Boston College history professor Heather Cox Richardson’s publication Letters from an American.

3. Promote your own creative talent influencer-style

On top of engaging external creators, publishers should also seek to extend into their market by turning the editorial staff into creators with their very own online presence. It may seem like a logical next step but be aware that the arrangement must be mutually beneficial with clear ground rules; the journalist feeds off the publishing title but is also representative of the brand with all the ensuing risks. Managed well, both publishers and staff/creators will enjoy a boost to their profiles, much like beauty influencer Nadine Baggott, who was originally a Beauty Editor at HELLO! Magazine but is now a content creator with a following of over 171k.

Likewise, Washington Post journalist Dave Jorgenson has expanded the Post’s TikTok presence to great effect. Since 2019, the masthead’s humorous videos have not only driven traffic to the main news product but also gained him followers as a personality in his own right. The Washington Post TikTok account now has 1.4m followers.

For publishers, the emergence of the creator economy has unleashed the potential for greater engagement and better insight into audiences than ever before. Publishers needn’t agonise over the decline of old publishing models but must emulate creators’ strategies to connect with future readers, particularly Gen Z. The good news is that publishers still possess gravitas and influence – to stay relevant is just a matter of meeting readers where they are. 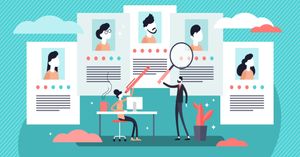